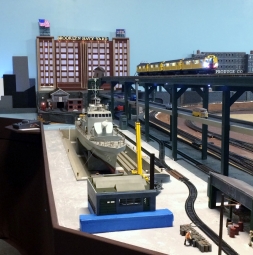 Model of the Yard by Central Operating Lines in Bohemia, NY  www.coltrains.com 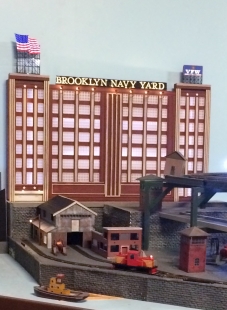 At the bottom left is a replica of the BNY Machine Shop, Building 280, were my father worked as a machinist in the Ordnance Shop for 25 years. Central Operating Lines, Bohemia, NY 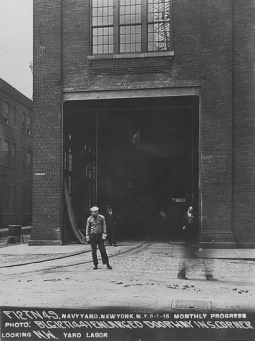 I regret never having asked my father why he was drawn to model trains.  Why not coins? Stamps? Fishing?  Some modelers I’ve met point to moments of father/son bonding over Lionel train sets in childhood as the trigger.  Others tell tales of massive black steam locomotives wailing and growling in the distance, bending trees and fences as they get closer and then roar past, horns screaming “STAND BAAAACK!” and “BEEEWAAAAAARE!!”  while miles-long freight cars cling together, clack-clacking through small Midwestern towns, flying past and out into wide open America.   One modeler friend, Jerry Gray, told me recently that to him the most fascinating thing about trains are their massiveness and accessibility. “You can’t touch, or lean against, anything that big and powerful,” he said. You can’t just walk up and lean against a plane.”

During a recent visit to the Brooklyn Navy Yard, my Dad’s workplace for twenty-five years, I uncovered some clues as to the origins of his hobby.   From 1939 until the Yard closed in 1966, he was a machinist in the Ordnance Shop there (with a break for service in the Navy during WWII).   During the Second World War, 70,000 people staffed the Yard in three shifts, working ’round the clock seven days per week.  Covering 300 acres, the Yard had its own railroad, including 10 Engines and 150 cars.  An article from the February 8, 1943 edition of the employee newsletter  The Shipworker reported that if straightened out into a single track line, the Navy Yard Railroad would run from New York City to Bridgeport Connecticut for a total of 63 miles.

Many of the buildings in the Yard, including the Machine Shop (Building 280), were equipped with indoor rail service (see photo).  In the Ordnance Shop, my father worked alongside other men and women building large guns and mounts that when completed were hauled onto flat cars inside the Machine Shop and pulled by locomotive to the dry docks where cranes lifted the guns onto the ships to be fitted for battle.  The April 5, 1943 edition of  The Shipworker describes the moment when each gun left the shop:

Charmed Guns
“The men and women of the Ordnance Machine Shop are doubly certain that anti-aircraft guns rolling from Building 280 are going to do all right in battle.  Not only does fine workmanship go into the guns, but each one “kisses” an American flag before leaving the shop.  The flag hangs over the railway track on which the guns are moved by flat car. The gun barrels are elevated in transit, and their muzzles just touch the flag as they move out, on their way to the battleline.  That, the Ordnance workers believe, is a good omen.”

The Ordnance Shop workers felt deep pride and satisfaction as they watched the guns embark by rail towards their noble destiny.  I wonder if it was these experiences that launched my father’s interest in model railroading; I suppose I’ll never really know for sure. Regardless, whether it was a train set on Christmas morning, a locomotive wailing through the night, picking up Grandma at the station or doing one’s part to defend the country, trains are really all about the people.